"When we are surrounded by problems, we worship God more."


The above quote is from Arjun, who tells his story of persecution in the video below, When Arjun and his wife decided to follow Jesus, the persecution started. First from their in-laws who refused to enter their home. Next from the rest of the villagers, who shunned them. Then from the village leaders who denied them water from the village well.  They withstood all of these until finally, threats of violence, including death threats, caused them to leave the village for the safety of their two daughters. But just a few weeks later they returned, persuaded that God wanted them to share His love with their neighbors.

The US Department of State has identified 60 different countries where Christians face persecution from their neighbors or from their government—simply because they believe in Jesus Christ.

Daily life for these Christians is a struggle.  The hostility they experience as a result of their faith can take many forms. Some suffer verbal harassment and discrimination at work or school. Others endure more extreme persecution, including imprisonment, torture, rape and even death.

The International Day of Prayer for the Persecuted is less than two weeks away on Sunday, November 3rd.  Don't forget to pray.


Want to Change the World? Pray. 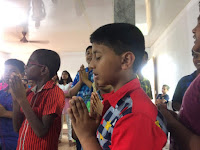