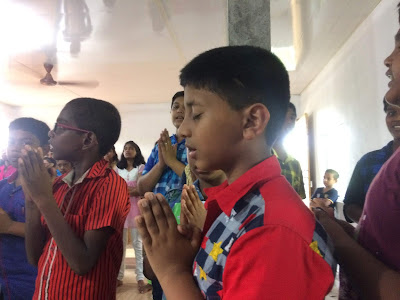 Want to Change the World? Pray.

Billions of people are living in India today without having a saving relationship with Jesus. Billions. Unless something changes.
We call them the "unreached" or "unengaged".  We hear the statistics and wonder: "What can I do? "

When Jesus was confronted with our dilemma, He saw the "multitudes" and He called them "sheep without a shepherd" and felt "compassion" for them.  Then He told His disciples:  "The harvest is plentiful, but the laborers are few; therefore pray earnestly to the Lord of the harvest to send out laborers into His harvest."   Matthew 9: 35-38

Four things jump out in these verses:  First, when Jesus saw the multitudes He called them "sheep without a shepherd".  He personalized them. These were real people with real faces who were really lost without Him. Second, He felt "compassion".  He really cared about them because He really understood them.  Third, He commanded us to pray in a certain way: "earnestly".  Synonyms for earnestly are strongly, deeply, intensely, seriously and industriously. Finally, Jesus focused first on the opportunity: "the harvest is plentiful".
Putting Jesus words into practice when praying for our KGM family in India and their mission to reach the "unreached" means getting personal.  Really caring enough to generate true emotion, compassion and empathy as we cry out to God for them with persistence and passion. Knowing that only God can change their situation.
Prayercast has a beautiful, moving prayer on video that can jumpstart us on our journey to adopt God's heart for His lost people in India. It combines music and stunning visuals of the Indian people and places. As we watch and pray along with an Indian pastor who knows the desperate needs of his country and its people, may our hearts be broken and stirred to a new passion and urgency.
Prayer is the first and most critical step in reaching the people of India with the Gospel. We know this intellectually in our head - may God shift it to our heart.


India captivates and overwhelms the senses of all who visit with its vibrant colors, immense crowds, and overpowering smells. One of the largest and most diverse countries in the world, India is filled with more than 2,500 distinct people groups who speak over 456 languages. A staggering one billion people are dispersed over one million square miles. Tremendous recent economic growth has led to an increasingly important role in global affairs. Yet the permeating and ever-present reality of India’s extensive poverty remains.

There is more human need in India than in any other country.

The caste system, a once rigid cultural institution that assigned people to a social stratum based on birth, led to many horrific human rights abuses. Though officially abolished, it continues to hold great influence over the culture and remains a major bar to social mobility. To this day, it is difficult for people of lower castes to find jobs, no matter what their education or background. India’s infrastructure is unreliable, and political corruption is rampant. Overpopulation also makes pollution and sanitation unmanageable. These contribute to deadly realities such as contaminated water and widespread diseases such as cholera, typhoid, hepatitis, and more.

One of the least reached countries on earth, 95% of Indians have never heard of Jesus!

While Hinduism is practiced by about 74%, only about 5% identify as Christians. But because of the sheer size of the population, even minorities (Buddhists, Jains, and Sikhs) number in the millions each. The Muslim minority is so large that within decades it is predicted that India will be the world’s largest Muslim nation. The legacies of Christian workers like William Carey and Mother Teresa have left a mark on this nation, revealing the massive positive contribution Christianity has made on education, health, social issues, and society. Yet it is still often seen as a threat to the traditional Hindu way of life. Anti-conversion laws make it difficult to share the Gospel. Those who choose to follow Jesus are often threatened with losing their status, jobs, homes, and even lives. Many Christian organizations have been forced out, leaving many bereft of physical and spiritual aid. However, despite the intense persecution, Christianity is the fastest growing religion in India.

This above is an example of a summary and video from Prayercast on India. It is a valuable resource for our prayer life and growth in this biblical discipline applied to the Great Commission of Jesus to reach the unreached.  It provides information on global geographical areas, persecution, and world religions with related prayer suggestions and videos,  Visit them at : prayercast.com/india.html