What's It Like to Be a Widow in India? l Kerusomen Gospel Ministries Video

Recent studies of India widows underscore the importance of  KGM's Year End initiative to provide 500 chickens and 65 goats to vulnerable families and widows in our India churches. Many of these animals will benefit rescued widows to help them become self-sufficient financially.
One study's [1] research on 10 Kerala widows was published in the NIH National Library. These were some of its findings (italics and bold added):
“Debt, Shame, and Survival:
becoming and living as widows in rural Kerala, India”
“It is reported that Kerala (home of KGM India’s headquarters) has the worst record among the Indian states for economic dependency among the elderly; 76% of its elderly women reporting no financial asset in their name. While, there is a history of progressive public policies in this state, including public support for vulnerable groups, such as widows, economic opportunities for women are few raising specific concerns for their maintaining a good standard of living—particularly if the husband has passed away prematurely. In this case, a woman may be left with young children and no source of livelihood.”
Economic Security:
(10 widow participant results)

“I received an honorarium of Rs.50 per month, which was not sufficient to support my family. I took on additional work. I would work at the angavadi (government childcare facility) from 9:30 to 3:00, and in the evenings I would clean houses. On Saturdays and Sundays I would work as a kuli worker making 10–12 rupees per day.”

Ushi’s income working 7 days a week is $1.40 a day (not including her earnings from cleaning houses.) That’s a little more than $42 a month to support herself and her 3 children. [2]

In this report, three of the women went on to join self-help groups and obtained loans to purchase backyard animals such as chickens and cows. One widow said she is happy because her growing milk business (she now has two new calves!) has made her “self-sufficient” and she is able to stay home with her children. The other two use their chicken and egg business proceeds to supplement other sources of income.
Investing in Widows' Dreams
This Christmas you can help a widow jump-start her path to self-sufficiency. These women are smart, motivated, and tenacious. They are ready and able. They just lack opportunity.  Their dreams are very similar to ours: they just want a chance to create a better future for their children and grandchildren.
It takes most widows over two years (many much, much longer) to save enough to invest in a small business start-up that costs just $25.
But with your help she can begin a backyard business today. Your gift of five chickens ($25) or one goat ($100) is far more than an animal. To these widows it means dignity, respect, independence and hope restored. It means life transformed -  for them and their children. 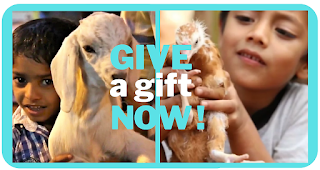 Give your gift in honor of a loved one.
[2]     Not a part of the report. Researched online using today’s income averages reported by various research agencies.
at December 18, 2020