Who Are the Frontier Unreached Peoples? l Kerusomen Gospel Ministries

Imagine living in an area where NO ONE knows Jesus. A place where there are no churches, Bibles, missionaries or Christians. These are the Frontier Unreached Peoples. Nearly half of India's population lives in communities like this. So what are we doing about it?

If you've never heard about the Frontier People Groups (FPGs) you are not alone. Sadly, the plight of FPGs is rarely reported and goes largely unnoticed by the majority of the western Christian community. In fact, most of the money, prayers, and missionaries we send out from the U.S. are not going to reach people in these areas.  How little is going there?  Well, if you put $100 in the collection plate at church, less than one penny supports reaching FBGs. Under one cent!

Are you surprised you didn't know about this?  But how could you if no one tells you?

Now YOU know the position the unreached frontier peoples are in. How can they know about Jesus if no one in their community tells them?  And how can they be told if there is no one there who knows Him?

So now we know. What's next?

Kerusomen is determined to get the word out about this. We believe millions of Believers - people like you - will be distressed AND will want to do something about it.  If that's you, the good news is you can. These are exactly the people Kerusomen is reaching every day in India.

Prayerfully watch the "Remaining Mission Task" video below. Then join us!


How Kerusomen Gospel Ministries is Tackling the Task...

Frontier People Groups (FPGs) are Unreached People Groups with 0.1% or fewer Christians of any kind, and no evidence of a self-sustaining gospel movement.

ONE FOURTH OF THE WORLD lives in FPGS with almost NO chance of hearing about Jesus.


The 31 largest FPGs contain HALF the population of all frontier people groups.

17 of the largest FPGs are in India comprising over 464 million people. 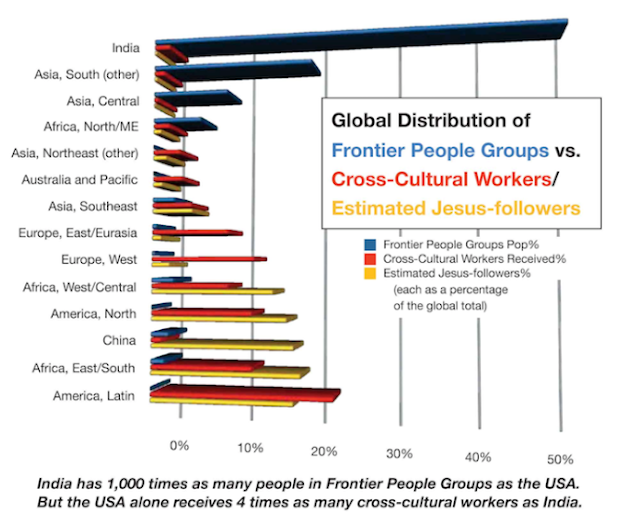 According to the Joshua Project:

Why are Gospel Movements necessary among Frontier People Groups? In Frontier People Groups, Christianity is often viewed as a competing foreign political and religious force that threatens to pull apart families and communities. Evangelism and church-planting that encourages or expects individuals to leave their families reinforces these fears. FPGs are best reached through gospel movements which bring God’s blessing to heal and strengthen families and communities.

How Kerusomen Gospel Ministries is Tackling this Neglect

Kerusomen Gospel Ministries partners with an established, growing, native Church Planting Movement that is targeting the frontier people groups in India. Because 100% of Kerusomen resources goes directly to the mission field, believers here are responding enthusiastically. Our Kerusomen communities, The Well and The Builders are growing and impacting more lives every day.

Pastor Sahayadas Simon, the founder of Kerusomen Gospel Foundation (the native church planting movement) is empowered by their support. He is training and mobilizing local believers and sending them back to evangelize and plant churches in their home villages all over India. Barriers are being broken because unreached people are learning about Jesus by studying the Bible with fellow citizens who are from the same country, speak the same language, and are familiar and respectful of local culture and customs.

Village by village the Good News is being preached and the Frontier Peoples are being reached. Thanks to you, 52 people groups have found hope for the first time and are worshiping Jesus at Kerusomen Gospel Churches Kerusomen partners have helped plant.
at February 19, 2020