Trust in the Lord...Lean Not on Your Own Understanding

Reaching the unreached in India is more difficult in some states than others.  Many states in the northern areas, where large numbers of Hindi-speaking peoples reside, are especially hard to evangelize because anti-Christian nationalists are active there. Anti-conversion laws make it dangerous to preach the Gospel overtly within their borders. Incidents of persecution are rising and becoming increasingly violent. Pastor Saha had long been stalled in his attempts to plant churches in these states. The situation appeared to be going from bad to worse until...


And we know that all things work together for good to them that love God, to them who are the called according to his purpose. Romans 8:28 (KJV) 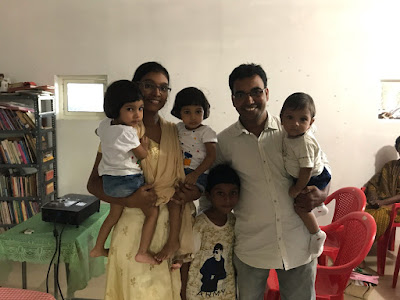 But God has made a way for Kerusomen to share the Gospel with the Hindi people groups right in the state of Kerala. where KGM has its headquarters.

Over the last decade, Kerala’s population growth has been slowing down while its economic growth is high. This has triggered a demand for outside labor to fill the ever growing job openings. Construction work is plentiful, attracting many migrant workers from the northern Hindi-speaking states such as Uttar Pradesh, Madhya Pradesh, and Bihar.  As a result:
Pastor Saha saw that God had provided an opportunity to reach the Hindis locally in Kerala, where the freedom to share the Gospel is not as hampered or dangerous as in the Hindis' home states. In many northern states, non-believers will often reject the Gospel without even listening to a Christian for fear of persecution. To date, there are no anti-conversion laws in Kerala, so seekers are not afraid to hear the Gospel message and are open to hearing about Jesus.

There was only one problem with this opportunity. Pastor Saha did not speak Hindi or have a trained pastor who spoke Hindi.

However, he knew that God did, so he prayed. Two years ago his prayer was answered.

God brought Pastor Rajendram over 1,000 miles from northern India to Kerala, where he "happened" to meet Pastor Saha.

The two men bonded instantly over their burden for the Hindi people.  Pastor Rajendram spoke Hindi and had been serving the Lord in Uttar Pradesh for 16 years. He told Pastor Saha of his calling which happened right after he graduated from Bible College. His mission was in the city of Varanasi, a Hindi holy area that draws pilgrims from all over India to the sacred waters of the Ganges River.

Pastor Saha told Rajendram of his passion to reach the millions of Hindi speaking migrants in Kerala. As they shared, it became increasingly clear that this was no accidental meeting.  Convinced that God had brought them together to achieve this purpose, Saha invited Rajendram to join the KGM mission. He enthusiastically agreed.

God is Growing His Hindi-Speaking Church

Pastor Rajendram admits that progress takes time with the Hindis and covets our prayers.

These are people who have never, ever heard the name of Jesus Christ. In fact, they don't even realize Jesus is a name. In Kerala, when Pastor Rajendram asks the Hindi men if they know Jesus Christ, they respond: "What kind of a machine is Jesus Christ?" They think he is asking them whether they can operate a machine (probably a machine related to the construction industry that many of them work in).

Despite the cultural barriers, Pastor Rajendram is not discouraged; he has seen that the Holy Spirit will reveal Jesus to the Hindis in His timing. His job is to persevere and sow the seed. Today, the church he leads, KBC Peyad church in Trivandrum, has 40-50 families and is growing steadily.

But Pastor Rajendram believes the true growth of God's church among the Hindis is much greater than these numbers tell.

In his experience over 16 years working with the Hindi people, he says that once the man understands and receives Jesus as his Savior, his whole family will become interested, ask questions and very quickly come to the Lord. In this way, he has faith the Gospel is spreading faster and farther than he can see,  All the way north, to Hindi family members of believers here, in Kerala.

Someday he knows he will worship with them.

Pastor Rajendram is one of 56 pastors serving under the KGM umbrella in India. They are passionate about reaching people who have never heard the name of Jesus before. Learn how you can be a part of their mission to reach the unreached in India for the glory of God.
at January 04, 2020