Saha and Anju Simon, the leaders of Kerusomen Gospel Ministries in India, just returned from a 10 day mission trip in which they visited more than 12 churches in both Telangana and Andhra Pradesh states.  So this month, I want to give you some background on the region they visited.

Andhra Pradesh is the seventh largest state in India with the 10th largest population estimated to be more than 54 million in 2019.  If Andhra Pradesh were an independent country, it would be the 26th most populous country in the world with more people than South Korea, or Colombia or Spain to name a few. 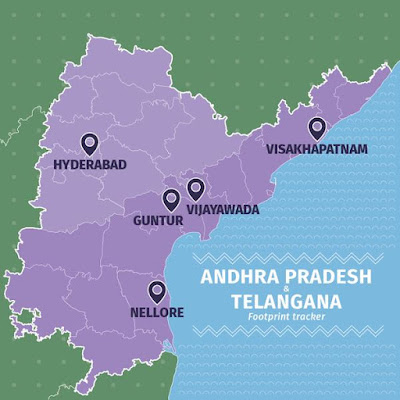 
Five years ago, Andhra Pradesh was much bigger. That was when about a third of the state was divided off to become the 29th state of India, Telangana.

Watch the short video below to get a flavor of Telangana and some historical data points on it's long journey to become a separate state.


The official language of Andhra Pradesh and Telangana is Telugu which is considered one of the classical languages of India. The vast majority of the people (70%) in these states live in the rural areas and make a living through farming.

More than 88% of the people of Andhra Pradesh and Telangana are Hindus.  Muslims make up 9.5% of the population and only 1.38% are Christian.

One of the major traditions of Hinduism is the caste system.  According to tradition, the Hindu people are divided into four castes. “The four classes were the Brahmins (priestly people), the Kshatriyas (also called Rajanyas, who were rulers, administrators and warriors), the Vaishyas (artisans, merchants, tradesmen and farmers), and Shudras (labouring classes)”.[1]

As a Hindu, your caste is thought to be determined by your actions in a past life.  If you lived virtuously in a past life you will be reincarnated into a higher caste.  If you were dishonorable, you would come back into a lower caste.  Besides these four castes, there are people consider so low as to not qualify to be a part of the system.  These people are the outcasts, the untouchables also known as the Dalits.

“To be Dalit is much worse than being poor, for no matter how much education or wealth a Dalit accumulates, he or she remains polluted, a shame on the face of the earth. Dalits are like biblical lepers, except that in mainstream Indian culture, they cannot be healed”.[2]

In the last 20 years or so, there has been an openness to gospel among Dalits in India and many of them have come to Christ.
Kerusomen Bible Church (Hebron Prayer Hall) @ Kutkulluru.


Since the Bharatiya Janata Party (BJP), a radical Hindu group, gained the majority of seats in the Indian parliament 21 years ago, persecution against Christians has been growing in India.  Some states have passed “freedom of religion” laws which ironically makes it illegal to convert to a another religion from the one you were born in.  Also, these laws outlaw active proselytizing.

Fortunately, neither Andhra Pradesh or Telangana have these laws.  In fact, just this February, Andhra Pradesh “passed a resolution which church leaders say will help socially poor Dalit Christians receive welfare benefits enjoyed by their counterparts in Hinduism”.[3]

Still is it not easy to be a Christian in Andhra Pradesh. Economic and social pressures on Christians make life difficult. In one example mentioned in a Christianity Today story, concerned “three hills in the state of Andhra Pradesh [that] are considered to belong to a Hindu deity, which local farmers have long "leased" the land from. But a new law says Christian farmers can no longer do so and must give up their land”.[4]

We thank Leecy for her generous partnership with Kerusomen.
"I wrote this book to ground new believers in their faith. Kerusomen uses it in India to train pastors and new believers. You can purchase the American version (just slightly different than the Indian one) from Amazon. All profits from the American version will go towards the printing cost of the Indian version."  Leecy Barnett