The two minute news short from NDTV India below is a must-see, eye opener about the dangers all women in India face simply for being female.


Over five hundred experts on women's issues, in 193 countries, found India the most dangerous country in the world for women. The survey of the experts was conducted by the Thompson Reuters Foundation. While the India government disputes the findings, the National Crime Records Bureau in 2016 reported a nearly 30% increase in crimes against women (41.7 to 53.9 per 100,000). 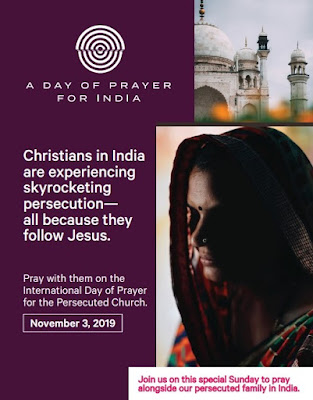 The Open Doors World Watch List reports annually on the most dangerous countries for Christians (India is #10).


The Thompson Reuters Foundation polling found India to be #1 in sexual violence against women.

Those wanting to persecute Christians in shame cultures like India, find women are doubly vulnerable. First because of their gender they are considered culturally "inferior" with few basic rights. And again because of their Christian faith.

"The data proves conclusively that Christian women are the most exploited group on the face of the earth today." said David Curry, Open Doors President at a Washington press conference in January, 2019

Tomorrow is International Day of Prayer for the Persecuted.
Please keep the women of India in your prayers on this special Sunday.