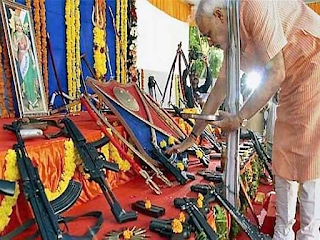 The United States Commission on International Religious Freedom added five countries to its list of top offenders in its 2020 annual report, released April 28.
India is listed as one of the “countries of particular concern” (CPCs), a designation of the world’s most egregious religious freedom violators.

All countries included in the report have engaged in “systematic, ongoing and egregious violations.” But the USCIRF separates countries into two categories:
To determine whether a country is a CPC or SWL the USCIRF looks at a specific set of criteria:
If a country’s violations meet two elements of the above standards, it is placed on the SWL special watch list. According to the USCIRF, India meets MORE than two standards of violation. It’s included in the CPC list as a country of particular concern where the government engages in or tolerates “particularly severe” violations of religious freedom.


Celebrating the Release of Pastor Nerren.
Pastor Nerren describes his 7-month ordeal and his personal observations
of the current situation facing Christians in India today.

American Center for Law and Justice (ACLJ.org) represented Pastor Bryan Nerren when he was detained in India. The above is an excerpt from ACLJ's interview of Pastor Nerren upon his arrival back in the U.S. (Go to the full interview here.)

Wrongfully detained in India for over 7 months, Christian Pastor Bryan Nerren – a U.S. citizen from Tennesee who has trained Sunday school teachers in India for more than 17 years – has finally been freed to return to America. But what was behind the false charges leveled against him?

On his way to attend conferences in India and Nepal, Pastor Nerren (who heads up the non-profit ministry Asian Children’s Education Fellowship) was targeted and arrested in Bagdogra, India. His alleged crime? Evading a customs duty on the funds he was carrying for the conference trip.  But the amount of money he was carrying, which he openly declared to customs in New Delhi, was less than the minimum required to constitute a crime under India law.  In fact, Pastor Nerren was never even questioned by customs officials about the duty. Instead he was asked if he was a Christian and if the funds he declared would be used to support Christian causes.

Unfortunately, India is ranked No. 10 on Open Doors 2020 World Watch List, which monitors Christian persecution. It has moved up 11 spots since 2015, indicating a sharp increase in extreme persecution. Open Doors states that “the primary force for persecution in India is Hindu nationalism, which advocates for the belief that India belongs to Hindus and people of other faiths should find somewhere else to live, work and worship.”

Pastor Nerren experienced first- hand the nightmare consequences of this belief when he was targeted, detained and even spit on simply because he was a Christian visiting Christians in India. Thankfully, he had advocates in the Unitied States government and the prayers of believers that secured his release.  But Christians living in India are less fortunate.

While we celebrate the miracle of Pastor Nerren’s safe return, let’s not forget Christians in India who suffer persecution daily for their faith. Watch the video as Pastor Nerren recounts his personal ordeal and miraculous release. Then please join KGM in thanking God for answering the prayers of His people for Pastor Nerren and in praying for persecuted Christians all over the world.

Pastor in Southern India Tied to a Tree & Beaten

According to International Christian Concern (ICC):

On March 10th a pastor was attacked by 150 radicals, tied to a tree and beaten severely for hours. The pastor was conducting Sunday worship services when the attackers broke into the service, destroyed furniture and musical instruments, harassed the worshipers, and dragged the pastor to several different public locations where he was beaten repeatedly. His injuries are severe.

Another pastor interviewed by ICC stated: “Recently, there have been five attacks on pastors in Gadag district alone,” a local Christian leader, who spoke on condition of anonymity, told ICC. “Across the entire state, the number of incidents have grown sharply because of the complicity of the police and the free hand given to Hindu radicals. This will make it even more difficult for Christians in the state.”

The persecution in India has its roots in social and cultural discrimination. Believers in India are often shunned, unjustly arrested, attacked—even killed—because they choose to follow Jesus and not Hinduism or the local religion. In addition to these, Christians are experiencing other forms of discrimination and denied employment.  In southern India, many communities rely on fishing for a sustainable living. Collective fishing is a common practice, which requires village members to share boats. Unfortunately, Hindus have denied Christians access to these communal village boats. This social boycott has left thousands of Christians in crisis, and deprived them of their sole source of income.

Karantaka, the southern state where the attacks were reported, borders Kerala, the home state of KGM headquarters. Please join us in praying for the pastors in India. 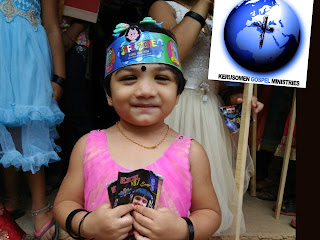 Over a period of three months no girls were born in 132 villages in India. Boy births were 216 during the same time frame in these villages.

Officials are investigating the suspicious data findings according to an NDTV news short video.

While the preference for boys over girls in India is known, cultural changes are slow. Kerusomen Gospel Ministries has two programs that are bringing hope to marginalized women. Read about them here.


The International Christian Concern (ICC) published 6 recent attacks on Christians in the southern state of Telangana in an article dated August 14, 2019.


The ICC correspondent writes "The attacks included beatings, threats, vandalism, and the disruption of worship services. This swell of violence and intolerance has many Christians living in India's Telangana State concerned both for their safety and their ability to practice their Christian faith openly."  Telangana is home to eight Kerusomen churches. Please include them in your prayers.

'I Thought We Were Going to  Die':
U.S. Missionaries Ambushed,
Saved by Mysterious Man on Motorcycle
CBNnews.com Headline 5/29/2019

On a recent Haiti mission trip, Doug Burbella, the Living Water Ministry's Medical Director, was shot and critically injured when Gang members fired a barrage of bullets into the ministry vehicle. To his horrified team members, it appeared the worst was yet to come...

Then 'something extraordinary happened' reports CBN.

INDIA IS NOT PROTECTING ITS CHRISTIANS 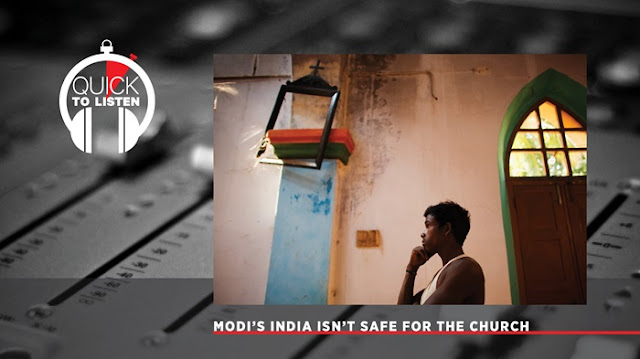 But difficulties for religious minorities in India during Modi’s five-year tenure paint a different picture than his “winning” message.

The Hindutva movement—which is made up of extremists who believe that all Indians must be Hindu—have gone after Christians, Muslims, Sikhs, and other religious minorities.

Since 2014 when Modi was first elected, India has risen 11 spots on the Open Door’s World Watch List.  Last year they reported that more than 12,000 Christians were attacked.

The above podcast from Christianity Today's digital media producer, Morgan Lee, with Vijayesh Lal, the general secretary of the Evangelical Fellowship of India, discusses:
The 51 minute podcast is an in-depth look at the challenges our brothers and sisters in India face but even more important, how the God is moving in India, keeping His promise to grow His church. 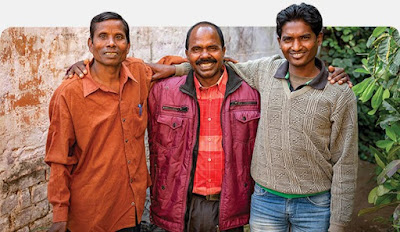 The Voice of the Martyrs (VOM) reports that the three young men pictured above were arrested in India after praying for a sick village woman who later died.

The charge was "murder" by prayer.


The men belonged to a small village Christian church.  They knew better than to share the Gospel on the streets of their village - that was certain to attract persecution.  They simply prayed for the wife of a friend who was ill. But the woman's neighbors blamed the Christian men for her death when she didn't get better after their prayer.  This led to their arrest and imprisonment.

The three have been released on bail after 11 months in prison but they still must stand trial for "murder" by prayer.  During that 11 month span they have led 13 fellow inmates to faith in the Lord Jesus. Surjan, Kolah, and Krishna may face life in prison. Please share with us in this special opportunity to stand with our brothers in India, lifting them in prayer.

You can read the full VOM article here

Level of persecution against them continues to rise, according to various media reports.
In the first nine months of the year, the Indian southern states of Karnataka, Telangana, Andhra Pradesh, Tamil Nadu, and Kerala have reported at least 60 cases of attacks against Christians. In contrast, 36 attacks against Christians were seen in the first nine months of 2017, according to religious freedom advocacy group Alliance Defending Freedom (ADF).

The state of Kerala, India, home of Kerusomen Gospel Ministries, India  headquarters, is located at the Southern tip region
where these attacks occurred.
Please join us in prayer for our brothers and sisters in India.

Continued violence against Christians and churches

Since the current ruling party took power in 2014, attacks have increased, and Hindu radicals believe they can attack Christians with no consequences. As a result, Christians have been targeted by Hindu national extremists more and more each year. (Open Doors USA 2019 World Report) The churches you support with Kerusomen are not immune to these attacks. While we cannot publish details for the protection of our fellow church families in India, if you join our prayer team we will gladly share with you updates as we receive them.
The following video will give you insight and knowledge as you pray.